Welcome to our new city-building world on Blocktopia! We’ve had some notable events unfold in the recent weeks, but they are in no means setbacks. With the existing SimCity crowded and cluttered, the community has been working hard to bring you a new world which is distinct from any we’ve had before. This is a clean slate for Blocktopia, with a bright future ahead!

We’re going to be doing things a bit differently here. Instead of individual regions, people will build as part of several pre-organised, themed areas. This way, people are working together to make bigger and better creations, and we have less chance of suffering from mission creep. When we set out to create SimCity, we intended for it to be a collaborative world, and yet we strayed from that considerably. Today, we go back to our roots. Our world will be firmly set in the present-day, focussed on civilians rather than military. Furthermore, intercity infrastructure will be coordinated democratically by the community instead of being privately owned, so that we can have a sleek and cohesive network.

We’ve got a variety of group projects active right now, and some on the sidelines. Some members have already decided what they want to contribute to, but there is so much ahead of us. We are now extending an invitation to all Builder+. If you want to join a project in progress, it’d be great to have you on board. If you wish to start one of our future settlements, or even suggest something else, get a group together and apply. Don’t feel limited to a single region either - if multiple projects take your fancy, feel free to be a part of them all! We’d love to have as many people as possible helping out to make this project a real gemstone of the community. 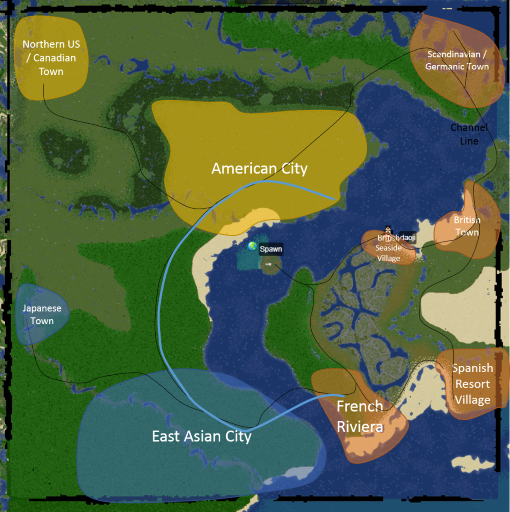 To make sure that we can coordinate everyone who’s part of the project, we are using an application process for the world. Don’t worry - this isn’t too formal or strenuous! We’re just looking to see what you want to contribute to and whether you can build in the style of that region. These are being performed through our dedicated Metropolis Discord server, which can be found at https://discord.gg/MGRdtvw.

For the time being, SimCity will remain on the server in its current state still open for contribution.

Thank you for your support, and we hope to see you onboard soon!