Lasagne Mafia
Game Information Thread​
​
​
Lasagne Mafia was a setup created by me. I will host this game alone, although if I see a need for it, a co-host might join in. As opposed to Spaghetti Mafia, my previous hosted game, the town in Lasagne Mafia has more abilities. Don't be fooled though, the mafia has received an arsenal of different methods to counter the town roles. Neither faction can assure their victory from the beginning of the game, as most of the roles presented has some way of creating a twist whenever luck is on their side. The Mafia has to be careful; because town members can end up giving the Mafia a hard time with their different roles, the same applies for the Town; if the town ends up giving out too much information too early, it could prove deadly. All in all, I think setup looks fun and creative, and I can't wait to see how it plays out.
​
Setup Information
​
Lasagne Mafia is an open setup, with 14 players in it, out of whom 4 are mafia and 10 are town:

10 Town:
The uninformed majority; whose win condition is to kill all the Mafia.

4 Mafia:
The informed minority; whose win condition is to be at least half, or more, of the current players. The Mafia share a chat, in which they may communicate during the night, they also posess a factionkill, where one of them, at the expense of their other visiting night abilities, can kill a player during each night.

[Playername], you are a Town Cop.
Ability: Each night you may investigate a player and will get a result of «Guilty», «Not-Guilty» or «No Result».
Win Condition: All threats to town are eliminated.

[Playername], you are the Town Doctor.
Ability: Each night you may protect a player from death, cannot protect the same player on two consecutive nights.
Win Condition: All threats to town are eliminated.

[Playername], you are the Town Tracker.
Ability: Each night you may track a player and be informed of every player that player visits during that night.
Win Condition: All threats to town are eliminated.

[Playername], you are the Town Indecisive Vigilante.
Ability: Every non-consecutive night you may kill a player.
Win Condition: All threats to town are eliminated.

[Playername], you are a Town Villager.
Ability: You don’t have any night abilities; your ability is your vote.
Win Condition: All threats to town are eliminated.

[Playername], you are the Mafia Godfather.
Ability: On Cop reports you will show up as «not-guilty»
Mafia Team: X, Y and Z are your mafia partners.
Win Condition: The mafia contains at least half, or more, of the current players.

[Playername], you are the Mafia Goon.
Ability: You don’t have any night abilities.
Mafia Team: X, Y and Z are your mafia partners.
Win Condition: The mafia contains at least half, or more, of the current players.

[Playername], you are the Mafia Hooker.
Ability: During the night you may roleblock a player, preventing them from using their nightaction.
Mafia Team: X, Y and Z are your mafia partners.
Win Condition: The mafia contains at least half, or more, of the current players.

[Playername], you are the Mafia Kidnapper.
Ability: During the night you may kidnap a player, kidnapping a player will roleblock that player and make them unable to be targeted, will also notifty the player that they were kidnapped.
Win Condition: The mafia contains at least half, or more, of the current players.


If a player hasn't sent in an action when the night ends, their target for the night will be randomized. If, during the day, two or more players have the same votecount on them, it will default to no lynch.


​
Rules​
Be respectful and polite.
• Do not edit posts. Make a double/triple/quadruple/penta post instead. Even if your forum rank and permissions will let you edit or delete posts, please do not use them.
• You are not allowed to make last statements after you are dead.
• If you have not signed up to play mafia, do not post in the game thread.
• Do not rate posts after you die. It is also preferable to post instead of rate when possible when alive.
• You are not allowed to use the -In a conversation- status as a tool against someone.
• Do not look at posts that have been marked as deleted, even if you have permissions otherwise.


Honesty and Cheating
• In all interactions with the moderator, you must be honest.
• Do not contact any player in or outside of the game about the game unless specifically allowed to by the moderator.
• Do not attempt to access another player's information by technological means (such as hacking).
• Do nothing that would be considered cheating. Use common sense.


Gaming the System
• Do not quote your role PM, take a screen capture of it, etc. You may paraphrase the role PM.
• Do not attempt to analyze the mechanics of a role PM in comparison to other players. For example, "the fourth word of my role PM is town." Or "my PM was sent at 11:23, when was yours?"
• No outside bets or other contrivances should be made.
• At no time should there be pre-game alliances made.
• If you are confused about an aspect of your role, ask your host about it in a private channel. Do not ask about it in the game thread.


Activity
• You are expected to be an active participant in your game. Do not flake.
• If you know you are going to be absent a particular amount of time, post in game and PM the moderator that you will be V/LA. Please include the date you plan to be back and posting.

Behavior
• No excessive racist, homophobic, sexist, etc. language may be used.
• Harassment of an individual player is NOT permitted. It is the nature of the game that players will be antagonistic toward each other at times. However, it should always be kept in the spirit of a game.
• Always play to your win condition. Never sabotage your team's chances simply because you're angry at them. This includes self votes and the like.


Quitting
• When you sign up, it is expected you are capable of remaining interested in the game throughout its run.
• If you have decided you can no longer be a part of this wonderful adventure, send a private message to the moderator announcing you are leaving.
• Under no circumstances are you to reveal your role when you quit, and you should not talk about your role while the game is still running.​
Failure to abide the rules will result in a warning, being replaced, or in most cases; a modkill.
​
Activity
​
Because of the low number of players in this setup and from the general activity I wish the game will have, I request only those that know they will post frequently to sign up. If a player becomes inactive during the game, I may and will end up replacing them. With that said, if you are going to be away or become inactive, please inform me ahead of time so I can find a replacement.
​
Vote Mechanism
​
Every day, the players may vote for a player to be lynched, or alternatively vote for a no-lynch. If a player has the majority of the votes before the deadline is reached, then the thread will be locked and that player will get lynched. If the deadline is reached, and no players' has reached majority, the player with the most votes will be lynched. If two, or more, players have the equal amont of votes on the deadline, the lynch will default to no-lynch.

As voting is possible the most crucial part of mafia, it also follows a strict voting format:

It should be clear that you are voting, the text must also be bolded. The player who is voted should also be clear. All and every vote who doesn't follow this format will not be counted towards the lynch.

If you got any questions about the setup, the roles or any other aspects of the mafia game, feel free to ask those questions in this thread.​

Name: Unusual (not UNU)
Timezone: GMT +1
A good joke: Notme is joining this game... we all know how that will go 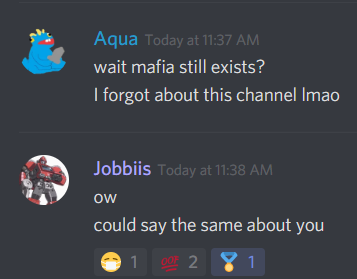 Name: HKCaper, i wanted to type HKGoat, but its practically the same thing

Alright so I am unsure about how busy I'll be in the next month, so put me in reserves in case you need people to start the game.

Alright so I am unsure about how busy I'll be in the next month, so put me in reserves in case you need people to start the game.
Click to expand...

Thank you for joining but where is that cute Glaceon avatar????

Also to everyone else that checked the thread but didn't join; come on you know you want to!!!

wow ok I decided I might check the game out see if I'd join but all I get is abuse :'(

Aqua said:
wow ok I decided I might check the game out see if I'd join but all I get is abuse :'(